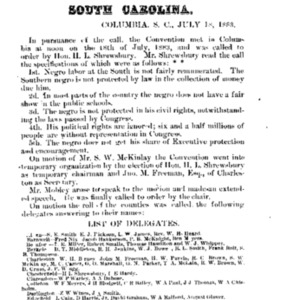 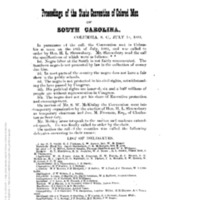 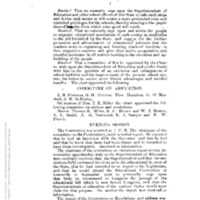 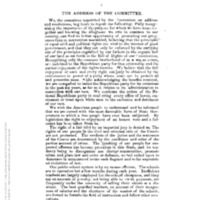 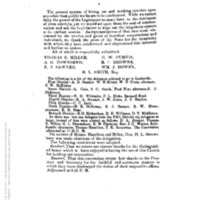 Proceedings of the State Convention of Colored Men

In pursuance of the call. the Convention met in Columbia at noon on the 18th of July, 1883, and was called to order by Hon. H. L. Shrewsbury. Mr. Shrewsbury read the call the specifications of which were as follows: * *

1st. Negro labor at the South is not fairly remunerated. The Southern negro is not protected by law in the collection of money due him.

2d. In most parts of the country the negro does not have a fair show in the public schools.

3d. The negro is not protected in his civil rights, notwithstanding the laws passed by Congress.

4th. His political rights are ignored; six and a half millions of people are without representation in Congress.

5th. The negro does not get his share of Executive protection and encouragement.

On motion of Mr. S. W. McKinlay the Convention went into temporary organization by the election of Hon. H. L. Shrewsbury as temporary chairman and Jno. M. Freeman, Esq., of Charleston as Secretary.

Mr. Mobley arose to speak to the motion and made an extended speech. He was finally called to order by the chair.

On motion the roll of the counties was called the following delegates answering to their names:

Clarendon—W P Warley, A A Dubose.

Resolved, That we earnestly urge upon the Superintendent of Education and other school officers of this State to take such steps and devise such means as will secure a more protracted term and extended privileges for the schools, thereby securing to the pupils thereof benefits from which some good will result.

Resolved, That we earnestly urge upon and advise the people to organize educational associations in each county as auxiliaries to the aid furnished by the State, and suggest for the further promotion and advancement of educational interests that the teachers unite in organizing and forming teachers' institute in their respective counties and give their active co-operation and cheerful assistance in all matters looking to the elevation and upbuilding of the people.

Resolved That a committee of five be appointed by the Chair to wait upon the Superintendent of Education and confer freely with him on the question of an extension and enlargement of school facilities and the improvement of the present school system, the better to secure more liberal advantages and decided benefits. The chair appointed the following

On motion of Hon. T. E. Miller the chair appointed the following committee on address and resolutions.

The Convention rea sembled at 7 P. M. The chairman of the committee on the Penitentiary, made a verbal report. He reported that he had an interview with the Governor and that he has said that he knew that there had been abuses and he intended to have them investigated. Received as information.

The chairman of the committee on educatio reported that the committee appointed to wait on the Superintendent of Education were cordially received; that the Superintendent said that the resolutions fully embraced his views as to the educational in eret of the State, that he had intended to so report to the Legislature, and that he would attend the Educational Convention at Louisville in September next to personally urge upon that body to recommend to Congress the passage of the educational bill which is now before Congress, and that the Superintendents of education of the various States would meet there for that purpose. On motion the report was received as information.

The report of the Crommittee on Resolutions and address was then read:

THE ADDRESS OF THE COMMITTEE

We, the committee appointed by the Convention on address and resolutions, beg leave to report the following: Fully recognizing the importance of the purpose for which we have come together and knowing the allegiance we owe in common to our country, can find no better opportunity of presenting our grievances than in convention assembled, believing that the principles of equal civil and political rights are vital to the interest of good government, and that they can only be enforced by the carrying out of the principles engrafted by our fathers in the organic law of our land as set forth in the Bill of Rights of our Constitution, Recognizing only the common brotherhood of men we, as a race, are indebted to the Republican party for free citizenship and the partial enjoyment of the rights thereto. We believe that the full enjoyment of each and every right can only be obtained by the continuance in power of a party whose aims are to protect all and prescribe none. While acknowledging the benefits received, we are compelled to indict the Republican party for its omissions in the past six years, as far as it relates to its administration in connection with our race. We condemn the action of the National Republican party in conferring every office of honor, emolument or trust upon white men to the exclusion and detriment of our race.

We wish the American people to understand and be informed that we are cursed with the most damnable form of State Government to which a free people have ever been subjected. By legislation the right to enjoyment of an honest vote and a fair count has been taken from us.

The right of a fair trial by an impartial jury is denied us. The rights of our people in the civil and criminal side of the Courts are not protected. The verdicts of the juries and the sentences of the Courts are determined by the condition and color of the parties accused of crime. The lynching of our people for suspected offences has become prevalent in this State, and its tendency being to disorganize and disrupt communities, promote crime and place law and order at defiance, we feel called upon to denounce in unmeasured terms such flagrant and so far unpunished violations of law.

Our public school system is by no means efficient. The schools are in operation but a few months during each year. Inefficient teachers are largely employed for the sake of cheapness, and they say on account of poverty, not being able to await payment, are frequently under the neces-ity of selling their claims at a discount. The best qualified teachers, on account of their meagreness of salaries and the shortness of the session of the schools are forced to forsake the field of instruction and follow other avocations.

The present system of hiring out and working convicts upon any other than public works are to be condemned. While we cannot deny the power of the Legislature to enact laws to the detriment of even convicts, yet we would set upon them the seal of condemnation and ask the Legislature to wipe out the iniquitous system at its earliest session. As representatives of that race most victimized by the averice and greed of heartless corporations and individuals, we thank the press of the State for the unanimity with which they have condemned and stigmatized this inhuman and barbarous system

All of which is respectfully submitted.

The following is a list of the delegates selected to go to Louisville:

As there was but one delegate from the Fifth District six delegates at large, instead of four were elected as follows: D.A. Straker, Thomas E. Miller, H.L. Shrewsbury, E.M. Pinckney, Rev. J.C. Waters, Robt. Smalls; alternates, Thomas Hamilton, T.K. Sasportas. The Convention adjourned at 11.30 P.M.

On motion of Messrs. Hamilton and Miller, Hon. H.L. Shrewsbury was made chairman of the delegation.

The following resolutions were adopted.

Resolved, That we return our sincere thanks for the distinguished honor which we have enjoyed in having the use of this Church for holding our convention.

Resolved, That this convention return their thanks to the President and Secretary for the faithful and courteous manner in which they have discharged the duties of their respective offices. Adjourned at 9.45 P.M.