Memorial of a committee appointed at a meeting of Colored citizens of Frankfort, Ky., and vicinity, praying the enactment of law for the better protection of life. 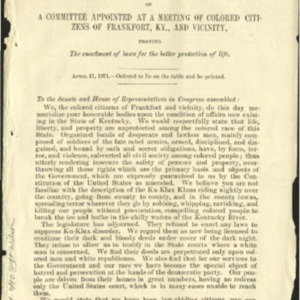 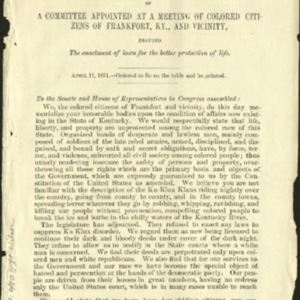 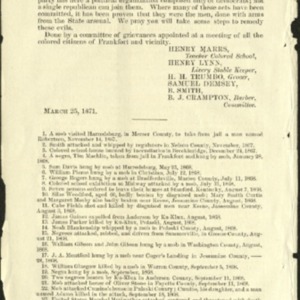 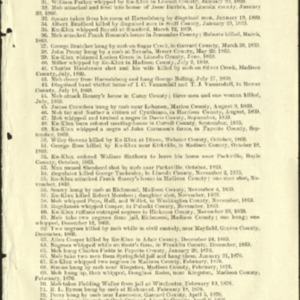 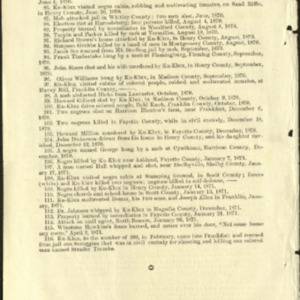 Memorial of a committee appointed at a meeting of Colored citizens of Frankfort, Ky., and vicinity, praying the enactment of law for the better protection of life.

A COMMITTEE APPOINTED AT A MEETING OF COLORED CITIZENS OF FRANKFORT, KY., AND VICINITY,

The enactment of laws for the better protection of life.

To the Senate and House of Representatives in Congress assembled:

We, the colored citizens of Frankfort and vicinity, do this day memorialize your honorable bodies upon the condition of affairs now existing in the State of Kentucky. We would respectfully state that life, liberty, and property are unprotected among the colored race of this State. Organized bands of desperate and lawless men, mainly composed of soldiers of the late rebel armies, armed, disciplined, and disguised, and bound by oath and secret obligations, have, by force, terror, and violence, subverted all civil society among colored people, thus utterly rendering insecure the safety of persons and property, overthrowing all those rights which are the primary basis and objects of Government, which are expressly guaranteed to us by the Constitution of the United States as amended. We believe you are not familiar with the description of the Ku-Klux Klans riding nightly over the country, going from county to county, and in the county towns, spreading terror wherever they go by robbing, whipping, ravishing, and killing our people without provocation, compelling colored people to break the ice and bathe in the chilly waters of the Kentucky River.

The legislature has adjourned. They refused to enact any laws to suppress Ku-Klux disorder. We regard them as now being licensed to continue their dark and bloody deeds under cover of the dark night. They refuse to allow us to testify in the State courts where a white man is concerned. We find their deeds are perpetrated only upon colored men and white republicans. We also find that for our services to the Government and our race we have become the special object of hatred and persecution at the hands of the democratic party. Our people are driven from their homes in great numbers, having no redress only the United States court, which is in many cases unable to reach them.

We would state that we have been law-abiding citizens, pay our taxes, and in many parts of the State our people have been driven from the polls, refused the right to vote; many have been slaughtered while attempting to vote. We ask, how long is this state of things to last?

2 MEMORIAL OF CITIZENS OF FRANKFORT

protect us, and that will enable us to exercise the rights of citizens. We see that the Senator from this State denies there being organized bands of desperadoes in the State; for information, we lay before you a number of violent acts, occurred during his administration. Although he, Stevenson, says half a dozen instances of violence did occur, these are not more than one-half the acts that have occurred. The democratic party has here a political organization composed only of democrats, not a single republican can join them. Where many of these acts have been committed, it has been proven that they were the men, done with arms from the State arsenal. We pray you will take some steps to remedy these evils.

Done by a committee of grievances appointed at a meeting of all the colored citizens of Frankfort and vicinity.

1. A mob visited Harrodsburg, in Mercer County to take from jail a man named Robertson, November 14, 1867.

2. Smith attached and whipped by regulators in Nelson County, November 1867.

14. Noah Blankenship whipped by a mob in Pulaski County, August, 1868.

16. William Gibson and John Gibson hung by a mob in Washington County, August, 1868.

22. Mob attacked Cumin's house in Pulaski County; Cumins, his daughter, and a man named Adams killed in the attack, September 18, 1868.

MEMORIAL OF CITIZENS OF FRANKFORT, KY 3

46. Mob tar and feather a citizen of Cynthiana in Harrison County, August, 1869.

64. Negroes whipped while on Scott's farm, in Franklin County, December, 1869.

4 MEMORIAL OF CITIZENS OF FRANKFORT, KY.

83. Negro school-house burned by incendiaries in Christian County, May, 1870.

92. Simpson Grubbs killed by a band of men in Montgomery County, August, 1870.

95. John Simes shot and his wife murdered by Ku-Klux, in Henry County, September, 1870.

104. John Dickerson driven from his home in Henry County, and his daughter ravished, December 12, 1870.

116. Ku-Klux, to the number of 200, in February, came into Frankfort and rescued from jail one Scroggins that was in civil custody for shooting and killing one colored man named Strader Trumbo.