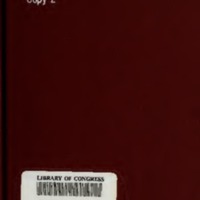 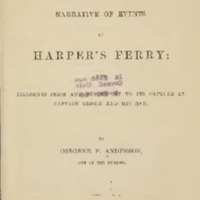 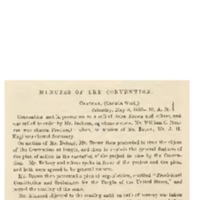 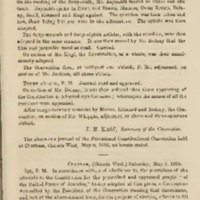 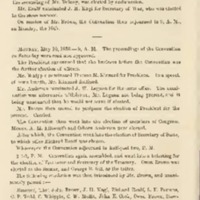 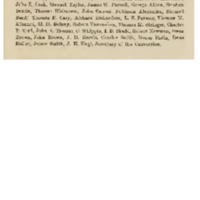 A VOICE FROM HARPER'S FERRY.

A NARRATIVE OF EVENTS AT HARPER'S FERRY;

WITH INCIDENTS PRIOR AND SUBSEQUENT TO ITS CAPTURE BY CAPTAIN BROWN AND HIS MEN.

ONE OF THE NUMBER.

PRINTED FOR THE AUTHOR,

MINUTES OF THE CONVENTION.

Convention met in pursuance to a call of John Brown and others, and was called to order by Mr. Jackson, on whose motion, Mr. William C. Munroe was chosen President; when, on motion of Mr. Brown, Mr. J. H. Kagi was elected Secretary.

On motion of Mr. Delany, Mr. Brown then proceeded to state the object of the Convention at length, and then to explain the general features of the plan of action in the execution of the project in view by the Convention. Mr. Delany and others spoke in favor of the project and the plan, and both were agreed to by general consent.

Mr. Brown then presented a plan of organization, entitled "Provisional Constitution and Ordinances for the People of the United States," and moved the reading of the same.

Mr. Kinnard objected to the reading until an oath of secrecy was taken by each member of the Convention; whereupon Mr. Delany moved that the following parole of honor be taken by all the members of the Convention—"I solemnly affirm that I will not in any way divulge any of the secrets of this Convention, except to persons entitled to know the same, on the pain of forfeiting the respect and protection of this organization;" which motion was carried.

The President then proceeded to administer the obligation, after which

MINUTES OF THE CHATHAM CONVENTION.

the question was taken on the reading of the plan proposed by Mr. Brown, and the same carried.

The plan was then read by the Secretary, after which, on motion of Mr. Whipple, it was ordered that it be now read by articles for consideration.

The articles from one to forty-five, inclusive, were then read and adopted. On the reading of the forty-sixth, Mr. Reynolds moved to strike out the same. Reynolds spoke in favor, and Brown, Munroe, Owen Brown, Delany, Realf, Kinnard, and Kagi against. The question was then taken and lost, there being but one vote in the affirmative. The article was then adopted.

The forty-seventh and forty-eighth articles, with the schedule, were then adopted in the same manner. It was then moved by Mr. Delany that the title and preamble stand as read. Carried.

On motion of Mr. Kagi, the Constitution, as a whole, was then unanimously adopted.

The Convention then, at half-past one o'clock, P. M., adjourned, on motion of Mr. Jackson, till three o'clock.

On motion of Mr. Delany, it was then order that those approving of the Constitution as adopted sign the same; whereupon the name of all the members were appended.

After congratulatory remarks by Messrs. Kinnard and Delany, the Convention, on motion of Mr. Whipple, adjourned at three and three-quarters o'clock.

The above is a journal of the Provisional Constitutional Convention held at Chatham, Canada West, May 8, 1858, as herein stated.

SIX, P.M. In accordance with, and obedience to, the provisions of the schedule to the Constitution for the proscribed and oppressed people "of the United States of America," today adopted at this place, a Convention was called by the President of the Convention framing that instrument, and met at the above named hour, for the purpose of electing officers to fill the offices specially established and named by said Constitution.

A Committee, consisting of Messrs. Whipple, Kagi, Bell, Cook and Munroe, was then chosen to set candidates for the various offices to be filled, for the consideration of the Convention.

A VOICE FROM HARPER'S FERRY.

On reporting progress, and asking leave to sit again, the request was refused, and Committee discharged.

On motion of Mr. Bell, the Convention officers then went into the election of officers, in the following manner and order :—

Mr. Whipple nominated John Brown for Commander-in-Chief, who, on the seconding of Mr. Delany, was elected by acclamation.

Mr. Realf nominated J. H. Kagi for Secretary of War, who was elected in the same manner.

The President announced that the business before the Convention was the further election of officers.

Mr. Anderson nominated J. W. Loguen for the same office. The nomination was afterwards withdrawn, Mr. Loguen not being present, and it being announced that he would not serve if elected.

Mr. Brown then moved to postpone the election of President for the present. Carried.

The Convention then went into the election of members of Congress. Messrs. A. M. Ellsworth and Osborn Anderson were elected.

After which, the Convention went into the election of Secretary of State, to which office Richard Realf was chosen.

2 1-2, P. M. Convention again assembled, and went into a balloting for the election of Treasurer and Secretary of the Treasury. Owen Brown was elected as the former, and George B. Grill as the latter.

The following resolution was then introduced by Mr. Brown, and unanimously passed:—

Resolved, That John Brown, J. H. Kagi, Richard Realf, L. F. Parsons, C. P. Todd, C. Whipple, C. W. Moffit, John E. Cook, Owen Brown, Stewart Taylor, Osborn Anderson, A. M. Ellsworth, Richard Richardson, W. H. Leeman and John Lawrence be and are hereby appointed a Committee to whom is delegated the power of the Convention to fill by election all the offices specially named in the Provisional Constitution which may be vacant after the adjournment of this Convention.

The Convention then adjourned, sine die.

THE WORK GOES ON.

NAMES OF MEMBERS OF THE CONVENTION, WRITTEN BY EACH PERSON.