Proceedings and Address of the Coloured Citizens of N.J. Convened at Trenton, August 21st and 22d, 1849 for the Purpose of Taking the Initiatory Measures for Obtaining the Right of Suffrage in this Our Native State. 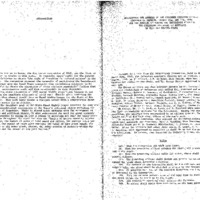 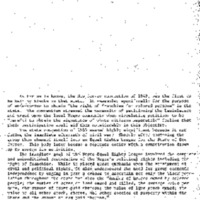 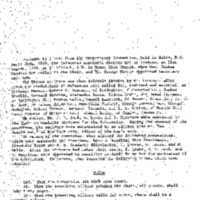 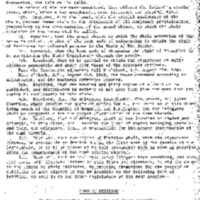 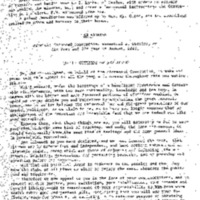 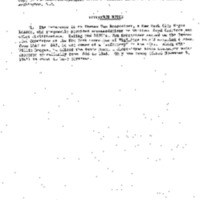 Proceedings and Address of the Coloured Citizens of N.J. Convened at Trenton, August 21st and 22d, 1849 for the Purpose of Taking the Initiatory Measures for Obtaining the Right of Suffrage in this Our Native State.

PROCEEDINGS AND ADDRESS OF THE COLOURED CITIZENS OF N.J.

FOR THE PURPOSE OF TAKING THE INITIATORY MEASURES

FOR OBTAINING THE RIGHT OF SUFFRAGE

IN THIS OUR NATIVE STATE

Pursuant to a call from the preparatory Convention, held in Salem, N.J. April 26th, 1849, the delegates appointed thereto met at Trenton, on 21st August, 1849 at 11 o'clock, A.M. in Mount Zion Church, when Rev. Joshua Woodlin was called to the Chair, and Mr. George Shreve appointed Secretary pro. tem.

On motion, Dr. J. S. Rock, G. Lewis and S. Harrison were appointed by the Chair to nominate officers for the Convention. During the absence of the committee, the audience were entertained by an address from Mr. Van Rensselaer, of New York city, Editor of the Ram's Horn.

On return of the committee, they offered the following nominations, which were approved: for President, Rev. J. Woodlin; Vice Presidents, Alexander Brown and R. D. Stewart; Secretaries, G. Shreve, G. Lewis, and M. Wells. After the officers had taken their seats, I. Locke, J. S. Rock, and S. Harrison, were appointed on committee to draft Rules for the government of the Convention. On return, they reported the following Rules, which were adopted:

1st. That the Convention sit with open doors.

2d. When the presiding officer assumes the chair, all present shall take their seats.

3d. When the presiding officer calls for order, there shall be a general silence.

4th. The presiding officer shall decide all points respecting order, except the house shall determine otherwise.

6th. No question but that of the elective franchise shall be admitted or discussed in the Convention.

7th. When two or more persons rise at the same time to speak, the Chairman shall decide who is entitled to the floor.

8th. All persons in speaking shall address the Chairman.

9th. No person shall speak more than twice on the same question, nor longer than ten minutes at a time, except persons appointed to address the meeting.

10th. This convention shall assemble at 9 o'clock, A.M., and remain in session till 12, noon. Afternoon session from 2 to 5 o'clock.

On motion, J. S. Rock, G. Lewis, R. Thomas, I. Locke, and S. Harrison, were appointed a committee to prepare business for the Convention; when the house adjourned till 2 o'clock, P.M.

The Convention met according to adjournment. In the absence of the business committee, Mr. Van Rensselaer offered a resolution, which after discussion, was laid on the table.

On return of the business committee, they offered the following resolutions, which, after a few amendments, were discussed and adopted, viz.:

1st. Resolved, that the house, with the special assistance of the Chair, proceed immediately to the settlement of all necessary preliminaries, preparatory to the consideration of the grand object, to which the whole attention of the house will be called.

2d. Resolved, that the grand object to which the whole attention of the house is called, is that of the best mode of endeavoring to obtain the right of franchise for coloured persons in the State of New Jersey.

3d. Resolved, that the best mode of obtaining the right of franchise is by petitioning the State Legislature through the people.

4th. Resolved, that we be careful to obtain the signatures of white citizens separately and apart from those of the coloured citizens.

Nine o'clock, A.M., August 22d, 1849, the house convened according to adjournment, and the business committee resumed.

5th. Resolved, that one hundred and fifty copies of a Petition be published, and distributed in numbers of not less than five nor more than ten copies to each County in this State.

6th. Resolved, that the delegates from Camden, Gloucester, and Salem Counties, shall receive the quota of copies for all the Counties of this State lying south of the Counties of Monmouth and Burlington; and the delegates shall be responsible for the proper distribution of the same therein.

7th. Resolved, that the delegates north of the Counties of Camden and Atlantic, in this State, shall receive the quota of copies belonging thereto; and they, the delegates, shall be responsible for the proper distribution of the same therein.

8th. Resolved, that the copies of Petition shall, with the signatures thereon, be returnable to Trenton during the first week of the session of the Legislature, so as to be passed up to that honourable body as soon as possible after the commencement of the next session thereof.

9th. Resolved, that we call upon every delegate here assembled, and also upon every well disposed citizen of this State and elsewhere, to aid the cause to the utmost of their abilities, by exerting themselves for the purpose obtaining as many signers as may be possible to the following form of Petition, to send in to our State Legislature at its next session.

To the Honourable, the Senate and House Assembly

of the State of New Jersey, at Trenton assembled

We, the undersigned, citizens of the State of New Jersey, hereby respectfully petition your Honourable body to take the lawful measures to so amend the Constitution as to leave out the word "white" in Article 2d, Right of Suffrage, Section 1st, of the Constitution of the State of New Jersey, so as to grant the Right of Franchise to all citizens thereof, irrespective of colour.

Here the business committee concluded; and Mr. Van Rensselaer's resolution was called up, and adopted, as follows:

Resolved, that it is the purpose of the members of this Convention never to cease petitioning the Legislature of this State until our prayer for rights is granted.

After which,the following from the Rev. Mr. Catto was submitted and adopted, as follows:

Resolved, that the delegates, and all persons concerned in the advancement of our present business, that of obtaining the elective franchise, shall continue to do all in their power to keep before the people the duty of striving to their utmost to obtain this right.

On motion it was Resolved, that Rev. J. Woodlin, I. Locke, and Rev. William T. Catto, be authorized to publish an Address to the citizens of New Jersey.

After which a contribution from certain delegates and others, citizens of Trenton, was handed over to I. Locke, of Camden, with orders to prepare and publish the minutes, &c.; and after a few mutual instructions the Convention at 2, o'clock, adjourned sine die.

A solemn Benediction was offered up by Rev. Mr. Catto, and the assemblage retired in peace and harmony to their homes.

From the Coloured Convention, assembled at Trenton, on

TO THE CITIZENS OF NEW JERSEY

We, the undersigned, on behalf of the aforesaid Convention, do make and promulgate this appeal to all the people in common throughout this our native State:--

Being endowed, under the blessings of a beneficent Providence and favourable circumstances, with the same rationality, knowledge and feelings, in common with the better and more favoured portions of civilized mankind, we would no longer deride you and ourselves by exhibiting gross inconsistency, and by so far belying the universal law and the great promptings of our nature; cultivated as we claim to be, as to have you longer suppose that we are ignorant of the important and undeniable fact that we are indeed men like unto yourselves.

Knowing then, that these things are so, you will naturally be led to suppose that with the same kind of teaching, and under the same influences, we should necessarily have the same kind of feelings and the same general ideas in common with yourselves.

And inasmuch as you have declared, and we have learned the fact,--that all men are by nature free and independent, and have certain natural and inalienable rights, among which are those of enjoying and defending life and liberty, acquiring, possessing, and protecting property, and of pursuing and obtaining safety and happiness.

And that all political power is inherent in the people; and that they have the right at all times to alter or reform the same, whenever the public good may require it.

Therefore we now appeal to you in the face of your own assertions, and in respect of your justice, your patriotism, your intelligence, your honesty and love of liberty,--and in remembrance of your accountability to Him from whom cometh every good and perfect gift,--requesting that you will use your influence, each for himself, in assisting us in this our purpose of obtaining for ourselves and our posterity, the blessings and perquisites of liberty in the exercise of the elective franchise, or right of suffrage; which we respectfully ask as a right belonging to us in the character of men; but heretofore withheld as an attache of color, in the conservative spirit of some, and the ignorance, envy and prejudice of others.

In conclusion, we would only say that, with our knowledge of the eminent standing of the highest virtues of which humanity is capable,--the religion, morality, intelligence, jurisprudence and good citizenship, generally evinced in this our native State,--we confidently expect a majority of your signatures to our petitions wherever presented; and we verily believe that the day is not far distant when New Jersey shall be hailed as the first consistent reformer of human rights in the Western world.

I. Locke, of Camden,

On behalf of the Convention.

Coloured Citizens of New Jersey (1849 : Trenton, NJ), “Proceedings and Address of the Coloured Citizens of N.J. Convened at Trenton, August 21st and 22d, 1849 for the Purpose of Taking the Initiatory Measures for Obtaining the Right of Suffrage in this Our Native State.,” Colored Conventions Project Digital Records, accessed January 27, 2020, https://omeka.coloredconventions.org/items/show/256.