Address to the Fourth Annual Convention of the Free People of Color of the United States : delivered at the opening of their session in the City of New York, June 2, 1834 by William Hamilton. 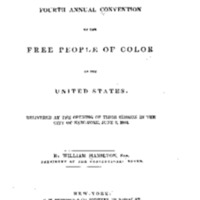 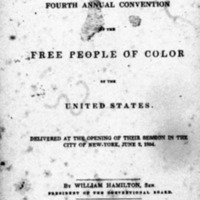 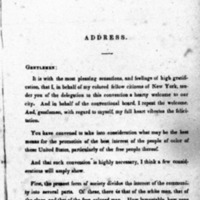 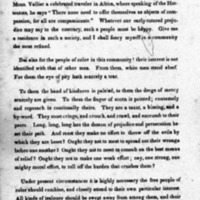 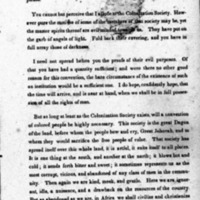 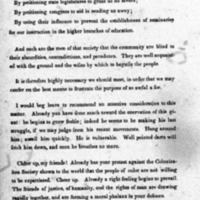 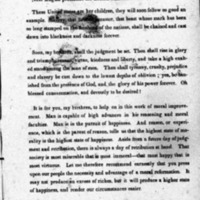 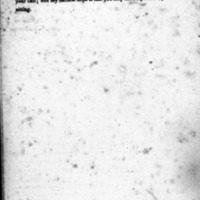 Address to the Fourth Annual Convention of the Free People of Color of the United States : delivered at the opening of their session in the City of New York, June 2, 1834 by William Hamilton.

DELIVERED AT THE OPENING OF THEIR SESSION IN THE

PRESIDENT OF THE CONVENTIONAL BOARD.

It is with the most pleasing sensations, and feelings of high gratification, that I, in behalf of my colored fellow citizens of New York, tender you of the delegation to this convention a hearty welcome to our city. And in behalf of the conventional board, I repeat the welcome. And, gentlemen, with regard to myself, my full heart vibrates the felicitation.

You have convened to take into consideration what may be the best means for the promotion of the best interest of the people of color of these United States, particularly of the free people thereof.

And that such convention is highly necessary, I think a few considerations will amply show.

First, the present form of society divides the interest of the community into several parts. Of these, there is that of the white man, that of the slave, and that of the free colored man. How lamentable, how very lamentable it is that there should be, any where on earth, a community of castes, with separate interests! That society must be the most happy, where the good of one is the common good of the whole. Civilization is not perfect, nor has reason full sway, until the community shall see that a wrong done to one is a wrong done to the whole; that the interest of one is or ought to be the common interest of the whole. Surely

that must be a happy state of society where the sympathies of all are to all alike.

How pleasing, what a compliment to the nation, is the expression of Mons. Vallier a celebrated traveler in Africa, where speaking of the Hottentots, he says "There none need to offer themselves as objects of compassion, for all are compassionate." Whatever our early-tutored prejudice may say to the contrary, such a people must be happy. Give me a residence in such a society, and I shall fancy myself in a community the most refined.

But alas for the people of color in this community! their interest is not identified with that of other men. From them, white men stand aloof. For them the eye of pity hath scarcely a tear.

To them the hand of kindness is palsied, to them the dregs of mercy scarcely are given. To them the finger of scorn is pointed; contumely and reproach is continually theirs. They are a taunt, a hissing, and a by-word. They must cringe, and crouch, and crawl, and succumb to their peers. Long, long, long has the demon of prejudice and persecution beset their path. And must they make no effort to throw off the evils by which they are beset? Ought they not to meet to spread out their wrongs before one another? Ought they not to meet to consult on the best means of relief? Ought they not to make one weak effort ; nay, one strong, one mighty moral effort, to roll off the burden that crushes them?

Under present circumstances it is highly necessary the free people of color should combine, and closely attend to their own particular interest. All kinds of jealousy should be swept away from among them, and their whole eye fixed, intently fixed on their own peculiar welfare. And can they do better than to meet thus; to take into consideration what are the best means to promote their elevation, and after having decided, to pursue those means with unabating zeal until their end is obtained?

Another reason why this convention is necessary, is, that there is formed a strong combination against the people of color, by some who are

the master spirits of the day, by men whose influence is of the strongest character, to whom this nation bow in humble submission, and submit to their superior judgment, who turn public sentiment which ever way they please.

You cannot but perceive that I allude to the Colonization Society. However pure the motives of some of the members of that society may be, yet the master spirits thereof are evil minded towards us. They have put on the garb of angels of light. Fold back their covering, and you have in full array those of darkness.

I need not spread before you the proofs of their evil purposes. Of that you have had a quantity sufficient; and were there no other good reason for this convention, the bare circumstance of the existence of such an institution would be a sufficient one. I do hope, confidently hope, that the time will arrive, and is near at hand, when we shall be in full possession of all the rights of men.

But as long at least as the Colonization Society exists, will a convention of colored people be highly necessary. This society is the great Dagon of the land, before whom the people bow and cry, Great Jehovah, and to whom they would sacrifice the free people of color. That society has spread itself over this whole land, it is artful, it suits itself to all places. It is one thing at the south, and another at the north; it blows hot and cold; it sends forth bitter and sweet; it sometimes represents us as the most corrupt, vicious, and abandoned of any class of men in the community. Then again we are kind, meek, and gentle. Here we are ignorant, idle, a nuisance, and a drawback on the resources of the country. But as abandoned as we are, in Africa we shall civilize and christianize all that heathen country.

And by thus preaching continually, they have distilled into the minds of the community a desire to see us removed.

They have resorted to every artifice to effect their purposes.

By exciting the minds of the white community the fears of insurrection and amalgamation;

By petitioning state legislatures to grant us no favors;

By petitioning congress to aid in sending us away;

By using their influence to prevent the establishment of seminaries for our instruction in the higher branches of education.

And such are the men of that society that the community are blind to their absurdities, contradictions, and paradoxes. They are well acquainted with the ground and the wiles by which to beguile the people.

It is therefore highly necessary we should meet, in order that we may confer on the best means to frustrate the purpose of so awful a foe.

I would beg leave to recommend an attentive consideration to this matter. Already you have done much toward the enervation of this giant: he begins to grow feeble; indeed he seems to be making his last struggle, if we may judge from his recent movements. Hang around him; assail him quickly. He is vulnerable. Well pointed darts will fetch him down, and soon he breathes no more.

Cheer up, my friends! Already has your protest against the Colonization Society shown to the world that the people of color are not willing to be expatriated. Cheer up. Already a right feeling begins to prevail. The friends of justice, of humanity, and the rights of man are drawing rapidly together, and are forming a moral phalanx in your defence.

That hitherto strong-footed, but sore-eyed vixen, prejudice, is limping off, seeking the shade. The Anti-Slavery Society and the friends of immediate abolition, are taking a noble, bold, and manly stand, in the cause of universal liberty. It is true they are assailed on every quarter, but the more they are assailed the faster they recruit. From present appear-

appearances the prospect is cheering, in a high degree. Anti-Slavery Societies are forming in every direction.

Next August proclaims the British dominions free from slaves.

These United states are her children, they will soon follow so good an example. Slavery, that Satanic monster, that beast whose mark has been long stamped on the forehead of the nations, shall be chained and cast down into blackness and darkness forever.

Soon, my brethren, shall the judgment be set. Then shall rise in glory and triumph, reason, virtue, kindness and liberty, and take a high exalted stand among the sons of men. Then shall tyranny, cruelty, prejudice and slavery be cast down to the lowest depths of oblivion; yea, be banished from the presence of God, and the glory of his power forever. Oh blessed consummation, and devoutly to be desired!

It is for you, my brethren, to help on in this work of moral improvement. Man is capable of high advances in his reasoning and moral faculties. Man is in the pursuit of happiness. And reason, or experience, which is the parent of reason, tells us that the highest state of morality is the highest state of happiness. Aside from a future day of judgment and retribution, there is always a day of retribution at hand. That society is most miserable that is most immoral--that most happy that is most virtuous. Let me therefore recommend earnestly that you press upon our people the necessity and advantage of a moral reformation. It may not produce an excess of riches, but it will produce a higher state of happiness, and render our circumstances easier.

You, gentlemen, can begin here. By managing this conference in a spirit of good will and true politeness ; by constantly keeping in view and cultivating a spirit of peace, order and harmony, rather than satire, wit, and eloquence ; by putting the best possible construction on each other's language, rather than charging each other with improper motives.

These dispositions will bespeak our character more or less virtuous and refined, and render our sitting more or less pleasant. I will only now add, that the report of the conventional board will be submitted at your call; and my earnest hope is that you may have a peaceful, pleasant sitting.

William Hamilton, “Address to the Fourth Annual Convention of the Free People of Color of the United States : delivered at the opening of their session in the City of New York, June 2, 1834 by William Hamilton.,” Colored Conventions Project Digital Records, accessed July 4, 2020, https://omeka.coloredconventions.org/items/show/601.